"I'm Da Trazshman not because I'm 'trash,' I'm Da Trazshman because I take OUT trash." Trazshman. chose to name himself while preemptively addressing the worst a hater could say about him. Once learning to "embrace his inner ugly" he was able to channel the energy living in Camden NJ in to being more creative and playing a major part in pushing the culture and creativity forward. Trazshman is also known locally as an established film director prior to the release of his mos
0 comments
Eli Seeney

Mir Fontane (@mirfontane) continues to represent his city and hold it down for his new home at 300 Ent. At the end of June he released his 12-track album Camden, named after his hometown in southern New Jersey. “The album tells a story about the love/hate relationship a 24-year-old kid has with his dangerous and poor hometown,” he told Mass Appeal. “It’s a mixture of personal stories and some untold stories of my peers, dead and alive.” Camden consists of 12 new tracks for hi
0 comments 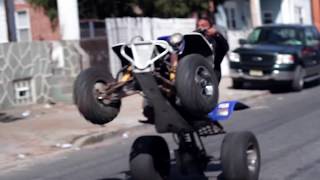